Background: Stroke is one of the leading causes of mortality and morbidity worldwide. Estimated annual incidence of stroke in Pakistan is 250/100,000 translating to 350,000 new cases per year. The prognosis of patient depends mainly on the severity of the stroke. In this study we evaluated serum calcium as a marker of severity of ischemic stroke.

Method: This cross-sectional study was conducted at the Department of Medicine, Holy Family Hospital, Rawalpindi, Pakistan, on 132 patients who presented within 72 hours of acute ischaemic stroke, from April 1 to June 30, 2017. The diagnosis of acute ischaemic stroke was based on symptoms of focal neurologic deficit and computed tomography (CT) brain evidence of ischaemic infarct. Severity of stroke was assessed using NIHSS. Patients’ serum calcium, albumin and renal function tests were obtained and the values along with patients’ name, age, gender and residential address were recorded in the study pro forma. SPSS version 22 was used for data analysis. Pearson's correlation coefficient was calculated to investigate the bivariate relationship between serum calcium and stroke severity on NIHSS. 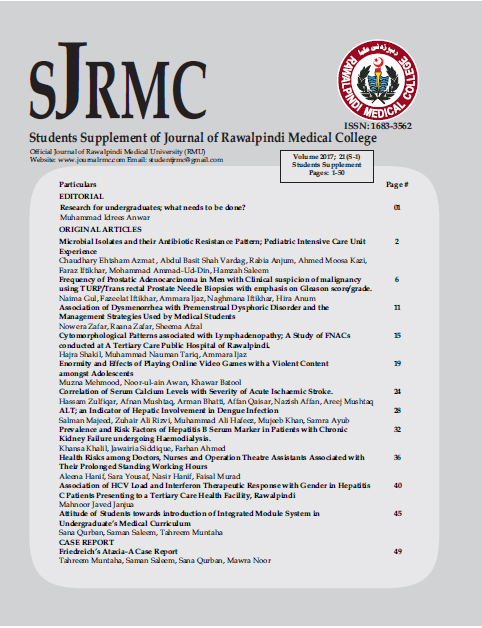