Background: Cervical cancer is one of the leading causes of mortality and morbidity in women worldwide. This can be detected effectively in pre invasive forms by using certain screening tests among which the Pap smear test is most widely used. This study was conducted to determine the frequency of abnormal cervical cytology by Pap smear and to stress upon the role of Pap smear in screening of cervical cancer.
Materials & Methods: A cross sectional descriptive study was carried out on 121 patients, reporting to a private lab, selected through non probability convenience sampling technique. Patients with complete referral forms were included and then their lab reports were reviewed. The required data (including slide number, age, reason of referral and lab findings) was collected on a Proforma and was further analyzed by SPSS version 23. By using descriptive statistics, frequencies were calculated and cross tabulations were made.
Results: Out of 121 lab reports, 57%(n=69) were normal, 34.7%(n=42) had inflammation without atypia, 1.7%(n=2) had Inflammation with atypia, 2.5%(n=3) had ASCUS, 1.7%(n=2) had LSIL, 1.7%(n=2) had HSIL and 0.8%(n=1) had cervical cancer. On total,
8.4%(n=10) reports were having abnormal cervical cytologies including one case (0.8%) of Invasive cervical carcinoma. 7.6% cases were found to be potentially pre invasive (i.e. Atypia , ASCUS , LSIL , HSIL). Out of which 66% were found in the age group of above 40 years.
Conclusion: Pap test effectively picked up 7.6% cases of abnormal cervical epithelium in potentially pre invasive forms. 66% of these cases were found in the age group of above 40 years. 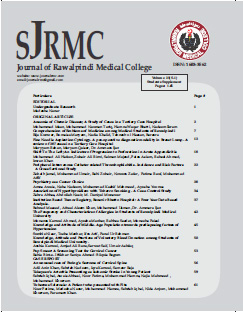