Perforated appendix! An experience of a Public teaching hospital

The most common cause of non-traumatic acute abdominal pain as well as the most common acute abdominal condition presenting to Surgical Emergency is none other than Acute Appendicitis hence it becomes the most common entity undergoing surgery in Emergencies all over the world. The lifetime risk for someone to develop acute appendicitis is 8.6% and 6.7% for males and females respectively, with 90% found in children and young adults and 10% in patients over 60 years of age.1

Increasing age or in other words decreasing immunity does affect the incidence of perforated appendix as we see the  the perforation rate in acute appendicitis is approximately 20~30%  but as the age goes beyond 60 years it inclines to  32-72%.2 Delay in the diagnosis caused by indefinite  history and physical examination  tends to contribute to higher incidence of perforated appendix as reported by Siripong et al.

In another study the risk factors that were found to be associated with perforated appendicitis were male sex, fever ≥ 38°C, anorexia, and duration of pain in the pre-admission period.3 In one of the the study pre-hospital delays were exceeding related to perforation as compared to in-hospital delays which was explainable because of a linear relationship present among the pathological grade  to hospital interval ratio , thus leading to increased risk of perforation.4 As far as the blood work was concerned , an increase in Total Leucocyte count with majority being polymorphonuclear leukocytes (PMN), and raised C-reactive protein (CRP) levels were found to be responsible for substantial increment in the  risk and gravity of complications in appendicitis. Presence of comorbid diseases didn't show any significant affect on perforation rate.5

Our study is unique of its kind as no such study has been conducted before from this area. Although we are presenting our institution-based data, which has some limitations, but it will help in enhancing our clinical grasp of the factors, leading to perforated appendix and reduction of its incidence If possible.

After getting approval from medical ethics board at Rawalpindi Medical University the medical records of all patients who underwent appendectomy at Surgical Unit 1 of Holy Family Hospital from 1st August 2016 to 1st August 2017 were retrospectively reviewed. Data was collected through the computerized system and manual entry register of patients at Holy Family Hospital .

100 patients who underwent emergency appendectomy in the above mentioned study period, were identified. All the patients with normal or incidental appendectomies and with incomplete medical records were excluded. The data collected included the patient's characteristics (computer record number, age, gender, education, residence, socioeconomic status), symptoms (abdominal pain, migrating pain, vomiting, fever, anorexia and diarrhea), physical examination (tenderness, rebound tenderness, guarding), laboratory investigations (Complete blood picture, Urine R/E ), and radiological findings. In addition to these variables included were co-morbids, pre hospital delay, patient delay, mode of transport, the type of operation, per operative findings, shifting of patient, and length of hospital stay, discharge status and presence of complications. Appendix was labeled as being perforated if it was mentioned so in operation notes or being confirmed by histopathology report. Patient delay was defined as the time interval, being coded in hours, from the time of onset of symptoms to the registration of patient in the emergency department. Hospital delay was defined as the time during which diagnosis was being made and patient waited for surgery.

Of all patients, there were 54 (54%) patients who had co-morbids; Diabetes Mellitus 27(50%), hypertension 17 (31.5%), chronic kidney diseases 6 (11.1%), and chronic obstructive airway disease 4 (7.4%).  Statistically insignificant relation was seen between co-morbid conditions and risk of perforation.

Pre hospital time delay was significantly longer in patients in the perforated group as compared to those in non-perforated group with p-value <0.001. No statistically significant difference could be established between the two groups in regard to the in-hospital delay (p-value 0.8623).

Regarding laboratory investigations, increased TLC (Total leucocyte  count) > 109/L, was seen in 62 (62%) of all patients at the time of presentation. High TLC count was present in 28 (70%) patients, in the perforated group, with 92% showing left shift while 35 (58%) patients in the non-perforated group had high TLC count with 62% demonstrating a Left shift.

Clinical Assessment, laboratory investigations and ultrasonography were used for diagnosis of all patients. Diagnosed mainly on clinical findings and laboratory studies were 73% patients. Ultrasound helped in the rest 27%. There was no intention to measure the sensitivity and specificity of the diagnostic tests as we only evaluated the positive cases.

Postoperative complications occurred in 13 (32.5%) patients in the perforated group and in 7 (11.6%) patients in the non-perforated group (p< 0.001). Significant complications were surgical wound infection (p=0.001) and intra-abdominal sepsis and collections (p= 0.046). Two patients developed wound dehiscence both of which were in the perforated group. Patients who developed surgical site infection were managed by antimicrobial treatment and dressings with majority showing a good response. Chest infection was noted in both groups.

Hospital stay in the perforation group was 7 days (3-46 days) which was longer than that of patients in the non-perforated group that is 3 days (2-23 days), and this was found to be statistically significant (p < 0.001).

Of the 40 patients in the perforated appendicitis group, there were 38 (95%) patients who were discharge on complete recovery while two (5%) mortalities were reported in that group where one patient died due to sepsis, and the other one died from congestive heart failure.

No mortality was reported in patients in non-perforated group.

Causes of delayed presentation in patients with perforated appendix

Misperception about gravity of illness

Lack of support from the family

Acute appendicitis being the most common cause of surgical abdomen in emergencies is managed with over all good results but when it progresses to perforation, it often leads to difficult convalescence and can even lead to death.7

In our study, perforated appendix was found in 40 patients (40%) which lies within the range reported by many other author.8,9,10,11. This high rate was also observed by some of the other authors as well and the factors contributing to it included atypical and delayed presentations, missed diagnosis, pre hospital delay, in-hospital delay and presence of co-morbids.12,13,14.

Barrett et al15 studied the trends in the rate of perforation over a period of 10 years from 2001 to 2010, the distribution of these cases with respect to age showed that 55.6% of them were under 45 years of age while 15.7% patients were above 65 years while what we observed in our study was different and the percentages came out to be 66% and 4% for under 45 and above 65 years respectively showing slight less numbers in the above 65 years group however having the same trends. When risk factors were looked upon, our study showed that male gender was related significantly to perforation, which is in accordance with previous studies.16, 17. A possible explanation for this as reported by Sheu et al18, is the reluctance of males to seek healthcare services. Middle socioeconomic status and living in rural areas were considered as risk factors, in our study with possible explanation that low income, large family size and lack of approachable health care services are the reasons behind it. The same was also observed by Sirikkurnpiboon and Amornpornchareon in their study.19

Co-morbids tend to affect the clinical outcomes in surgical cases and we had a hufge number that is  54 (54%) of all patients with co-morbid conditions at presentation, yet no statistically significant association could be established between co-morbids and risk of perforation. Storm Dickerson et al  also couldn't establish a significant association  in their study as well.9

In several previous studies pre-hospital and in-hospital delay in appendectomies has been reported to be linked with poor outcomes.20, 21,22. In a study conducted by Busch et al23 an increased risk of perforation was seen with delay of more than 12 hours. Giraudo et al24 concluded that a delay of more than 24 hours from onset is strongly associated with risk of complications. In contrast some of the authors have shown that delaying has no association with perforation in acute appendicits. In a study conducted by Teixeira25 delay in appendectomy was not shown to be linked with an increased risk of perforation however it did show increase in the surgical site infection in the post-operative days. Likewise, Abou-Nukta et all26 also concluded that a 12 to 24 hours delay is not associated with risk of perforation. In our study, statistically significant association was established between pre-hospital delay and risk of perforation while no association could be established between in-hospital delay and perforation risk. Ideal timing for appendectomy, however, still remains debatable. Some of the factors that can be controlled include creating awareness among the people regarding early presentation to well-equipped hospitals as soon as the symptoms appear. 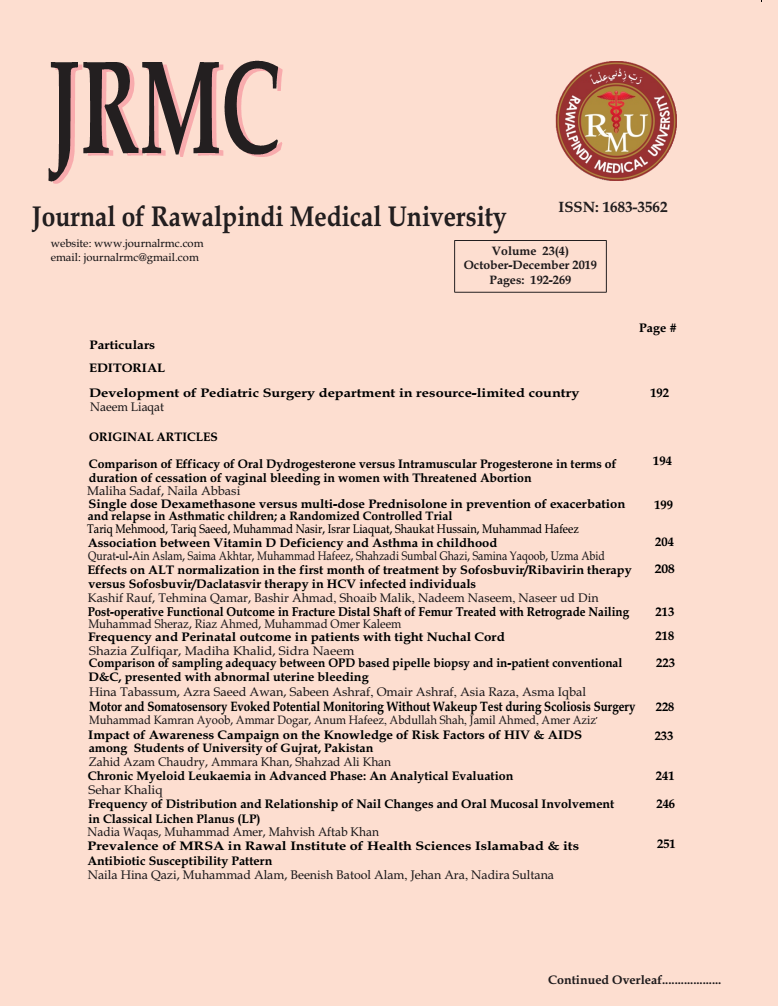